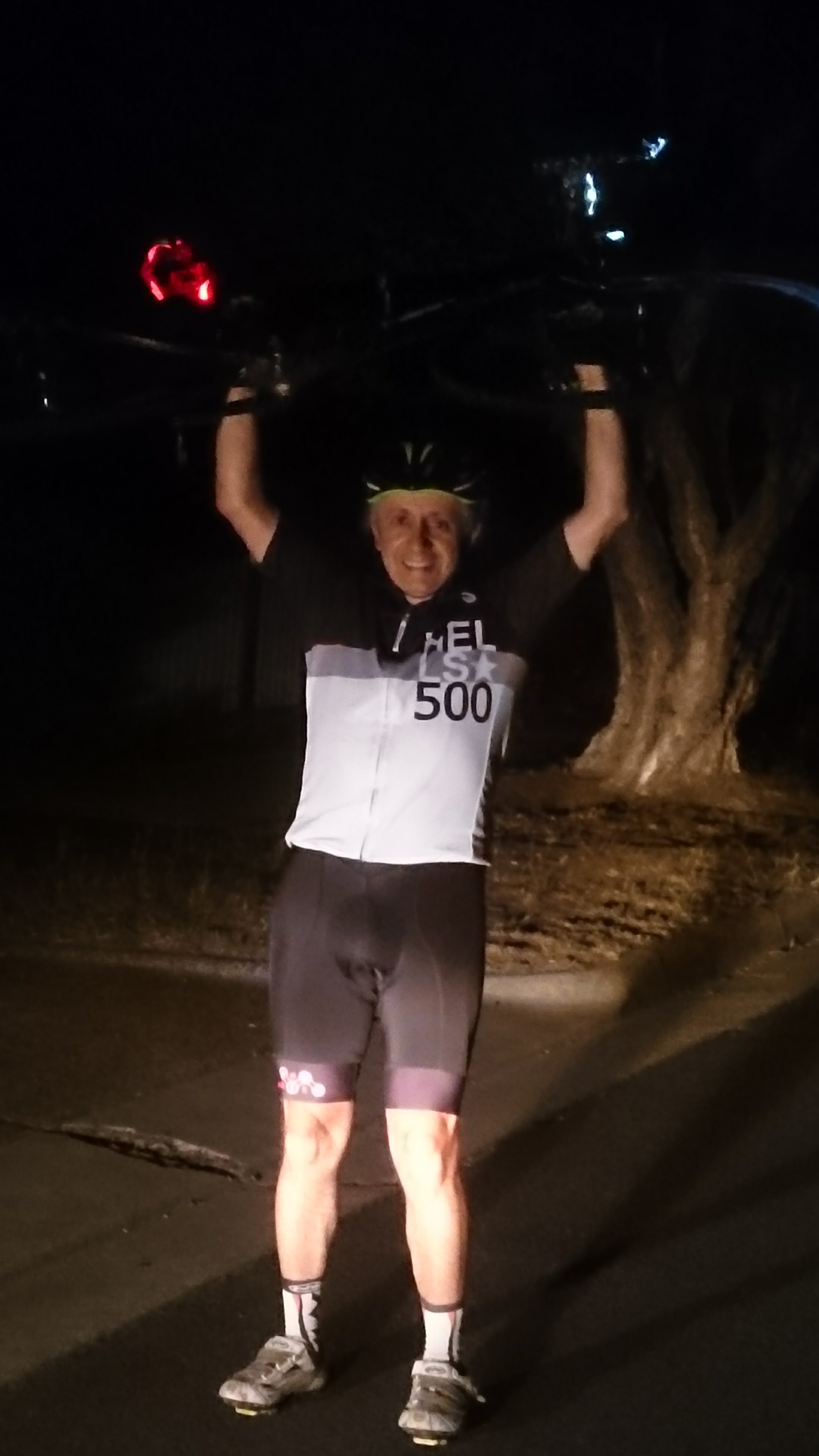 In April of 2015, I Everested Mount Kosciuszko for a second time, reaching an altitude of 10,500 vertical meters which was a personal record for me. This was the third time I had completed an Everest and of the three, curiously the easiest.

In the aftermath, I wondered if I could go higher. I wondered what boundaries there were for my 55 year old frame.

I hate boundaries. I hate being told “you shouldn’t do that”.

I hate the idea that people “think”, “he shouldn’t do that” even more.

The question “how high can I go” kept swirling around in my brain and I knew it needed to be answered. Like an itch that needed to be scratched.

So I set a goal of completing a double Everest. Not publicly. This was just a notion that would germinate over time.

This was not a goal that I could put my hand on heart and say “I can/will do this”. Truthfully, it seemed ridiculous but by setting up an absurd goal, I knew I would get the best out of myself, whatever the outcome.

Despite what I had achieved on Mt Kosciuszko, I knew that I wasn’t in good enough condition to complete a double, so I set-up a program of “training” rides that consisted of Everests in June, October and November. These were intended to improve my strength and endurance in preparation for an assault during the Christmas New Year period of 2015.

In June, I Everested the Kew Boulevard to coincide with tack protest activities.

In October I took on Booyan crescent and set an objective of completing it inside 18 hours. I figured that if I was to complete a double Everest, I would need to do so inside 40 hours to prevent sleep deprivation from becoming a factor. 18 hours for the first, 22 hours for the second seemed like a reasonable equation and would mean I would only have to ride through one night.

16 hours into this ride, I was behind schedule, so I stepped up the pace and ultimately completed the Everest in 18 hours and 1 minute. In so doing, I climbed more vertical in that last hour than I had in *any* hour of any of my previous Everests. It was obvious that my physical condition had improved significantly since April.

The plan for one more training run in November was hijacked by Kew Boulevard protest activities and I couldn’t find a date for a final “training” run until late November. This was too close to the Christmas New Year period for comfort. I was concerned that I wouldn’t fully recover in time for the attempt at a double. My choice was to defer the attempt until I could complete another “training” Everest or, go for it and I chose the latter because of the ease with which I wrapped up the October ride. I felt ready.

Concerned that I might look foolish, I made no announcement of my plans other than a subtle hint on Instagram in early December. The announcement wouldn’t come formerly until I had weather reports for the Christmas New Year period; there was no way I was going to attempt a double on a scorching Melbourne summer’s day.

A few days before Christmas, I could see that the weather for the 27th/28th was looking pretty benign, so I locked in the dates and made a public announcement.

Booyan Crescent was the mark because of how I performed on there in October. A calibration run and ride plan confirmed it would be a 500KM journey taking near enough to 40 hours (elapsed).

Now that I had opened my big mouth, I was committed. I was terrified of failing and terrified of looking foolish. And every time I went through the ride plan in my head, all I could think about was the prodigious amounts of suffering that lay ahead.

Boxing Day arrived and I went to bed nice and early knowing that I needed a good night’s sleep before the ride started. I was in bed by 10:00 pm…and unfortunately stared at the ceiling for the next five hours. I couldn’t sleep. Anxiety about the ride was keeping me awake. At 3:00AM, knowing that the alarm would go at 5:00AM, I pulled the pin and aborted. Better to reset than commence a ride that would almost certainly have ended in failure.

Delaying another day was not an option. It was now or never.

I forced down some breakfast and drove to Booyan Crescent. At 6:20AM I was hurtling down the one kilometre piece of road for the first time. It was like descending into an abyss, not knowing when, where or how it would end.

By 8:30AM, the first support riders were appearing including a bunch from the Hells 500 Tuesday’s RFWYA crew. Conditions were ideal and I was able to set a cracking pace. By Midday, I was about an hour ahead of my plan and I was feeling pretty damn good.

As the afternoon wore on, I kept improving my position with respect to my plan and by late afternoon was around two hours ahead of schedule. At the rate I was climbing, I would have finished inside 36 hours and would be avoiding nightfall on the 29th. Surely it couldn’t be that easy, could it?

Well I got my answer to that question soon enough, and it was a resounding “NO”.

After rattling off the first Everest in 16 hours (a record for me), I took a “half time” break and was circulating again before midnight. A few hours later however, fatigue was starting to grab hold of me.

My vertical ascent rate was falling, my heart rate was tumbling, the temperature was falling (got down to 5C) and the voices in my head were screaming “get off the bike and your suffering will end”.

The wheels were falling off. This is the moment that all Everesters go through at some point along their journey and it’s what makes the challenge what it is.

But I had an ace up my sleeve (two actually). I was over two hours ahead of schedule. I could afford some downtime. So at around 3:30AM I decided to take an extended break. I sat in the car, changed my kit, ate heaps and chatted with Helen whom somehow knows exactly what needs to be said and when to say it.

When I said to her that I desperately wanted the suffering to end (actually, what I said was “fuck this”), she replied “you’re not gunna quit”. It wasn’t a question or an instruction; she was just waking up the mindless, knuckle-dragging, club wielding Neanderthal that lurks beneath the surface of my consciousness and gets in the driver’s seat when things get tough.

The finish line still seemed an eternal distance away and I was seriously questioning my ability to finish. Nevertheless, the rest break meant I would be able to resume and I reaffirmed my commitment to continue until my legs completely gave up.

At almost exactly 5:00AM, a soft glow started to appear on the Eastern horizon. It was dawn. And just as I had hoped when I was setting up the ride plan, I got a huge mood lift from the early morning light just when I needed it. I was circulating on Booyan Crescent again by 5:15AM, albeit very slowly at first.

By 6:30AM, support started appearing again. It was fantastic to have company. There was even a delivery of Egg and Bacon McMuffins, with hash browns…I can’t begin to describe how good these were! The conversations with the Sherpas were a distraction from the fatigue and I was able to keep up a reasonable pace throughout the morning.

Around Midday I was at 13,400VM. The significance of this was that I was now three quarters of the way up. My legs were utter garbage but they were still turning. Even though a quick calculation told me that there was at least nine hours of effort remaining, for the first time since hatching this plan after reaching 10,000VM nine months earlier, I started to believe I could complete a double.

As the afternoon progressed, there was a steady flow of cyclists and well-wishers cheering me one. The suffering thankfully remained at a tolerable level and my mood, bit by bit, was improving as the finish line drew closer. An unexpected delivery of icy poles mid-afternoon when the temperature peaked at 35C was like a godsend and at 4:40pm, the altimeter clicked over 15,000VM. This was a number that at 3:30AM I didn’t believe I would see. Yet there it was. I could smell the cheese for the first time.

As darkness returned to Booyan Crescent, I had around 1000VM to go, about two hours at the rate I was progressing. A couple of mates turned up to bring me home and time passed almost without me noticing. Another small group of friends and family counted down the laps at the top of the climb. 10..9..8..7..6..5..4..3..2..1…

At near enough to 11:00pm the altimeter ticked over 17,696. BOOM. The torture was over and I had become a double Everester.

Someone asked me if I was happy. I think I responded by saying “no, I’m just numb”… I couldn’t say I was happy (at the time) because everything (and I mean everything) hurt. I was however enormously relieved that the mission had been accomplished.

I love pushing back boundaries. The sense of satisfaction and achievement I get from being challenged is directly proportional to how much pain and suffering I endure along the way.

That is who I am.

And what began as a simple question nine months earlier was answered. Kind of. I didn’t stop this ride because my legs quit. I stopped because I achieved my goal.

Maybe this is ground hog day. Maybe I’m back on Mt Kosciuszko asking the same question, “how high can I go”, again. Time will tell. 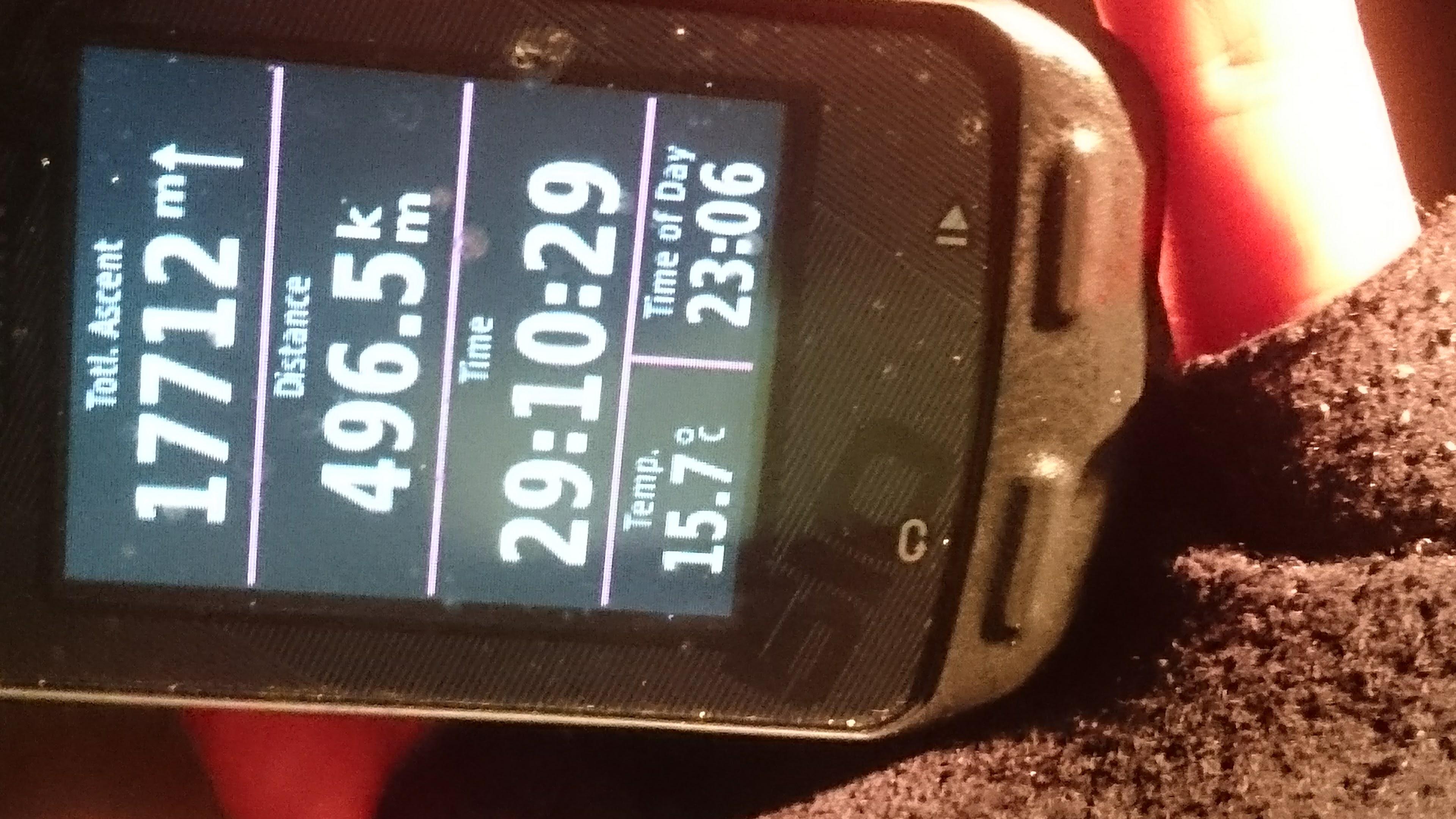 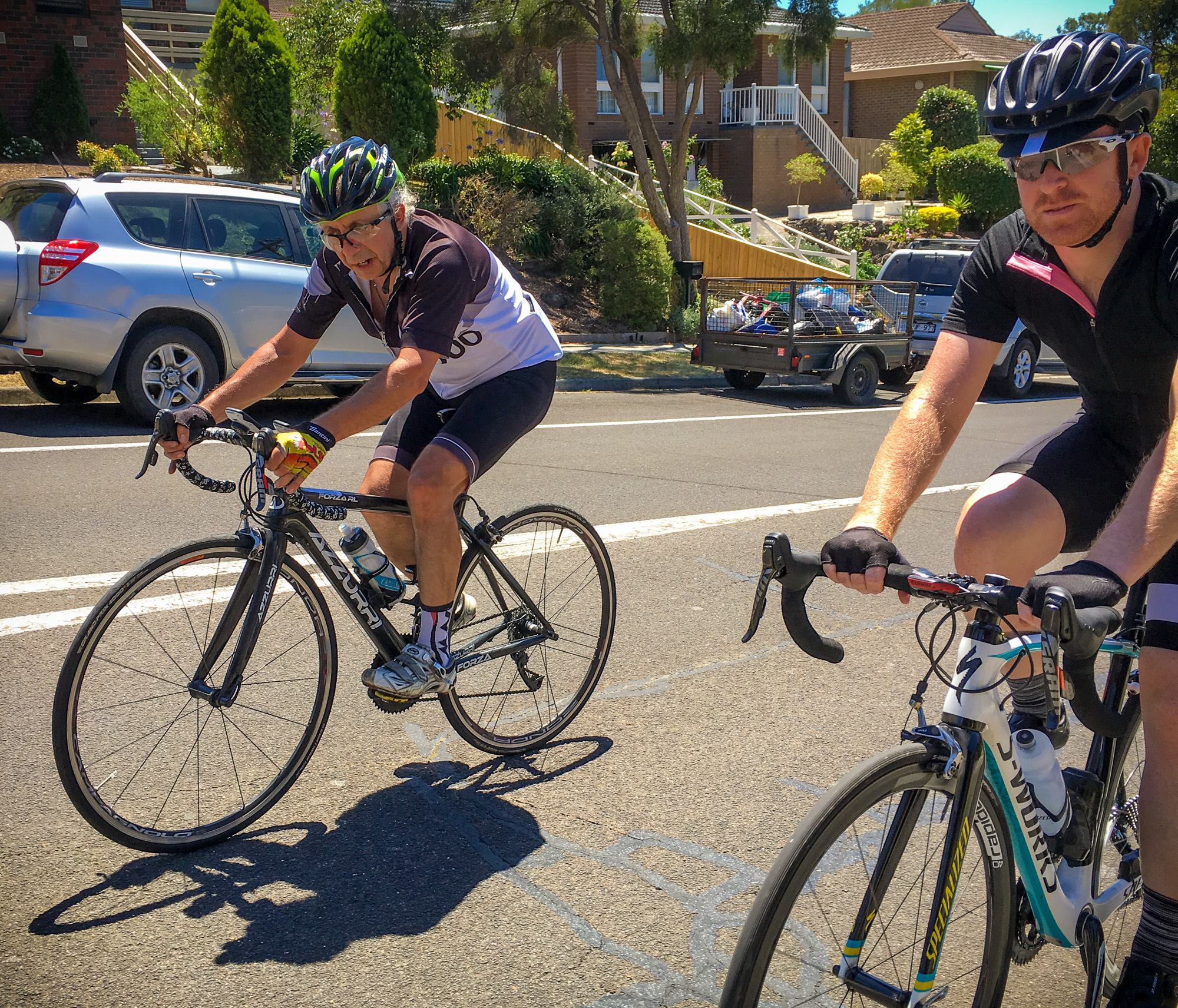 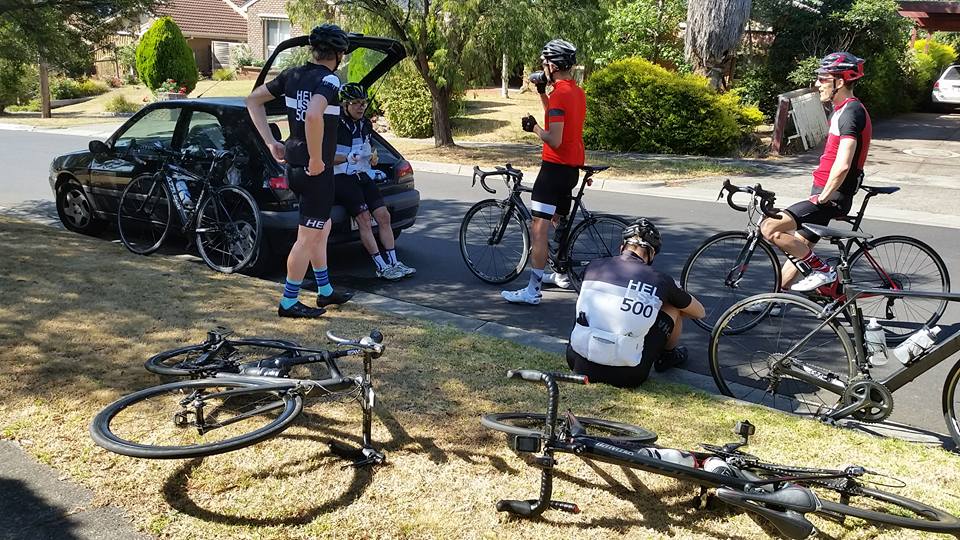